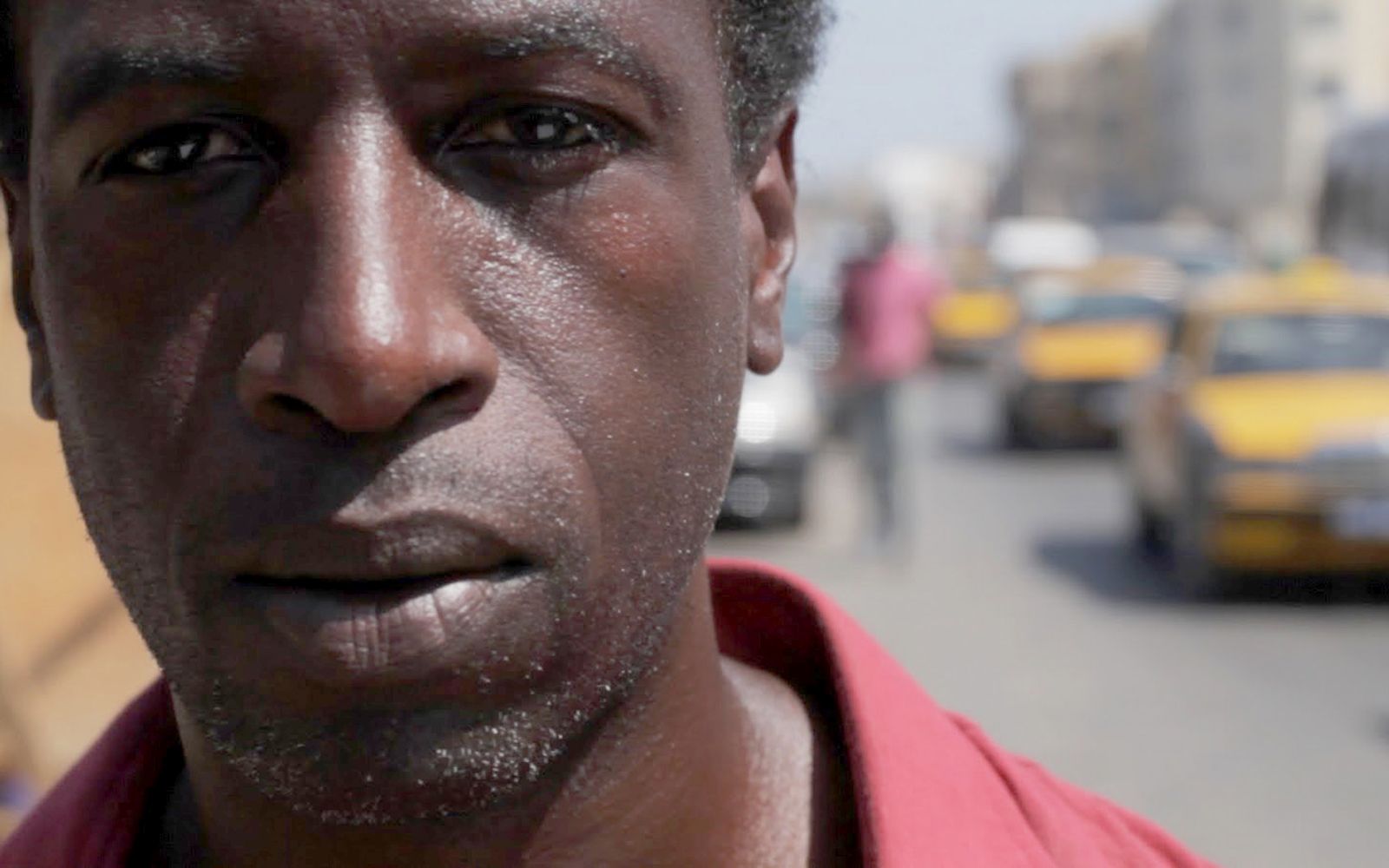 You can stream Alain Gomis’ Félicité below this article thanks to VOD platform Eyelet.

The work of the French-born filmmaker is closely linked to Africa. His view is not that of a colonizer but is based on respect for local culture; he shows interest in problems and dilemmas of people which are universal and quite specific at the same time.

Even though Alain Gomis was born and raised in Paris, he also recognises his father’s Senegalese and Guinea-Bissauan origin. The complicated relation of the diaspore to the old and new country, the feeling of not being part of neither culture, and commitment to stay (and not let down one’s family) and also come back (and help one’s nation) were expressed in his first two features L’Afrance (combination of the words L’Afrique and France; 2001) and Andalucia (2007).

Especially the former is overtly political – characters often discuss their identity and possibilities to survive. The main protagonist is a Senegalese student of political sciences who wants to return home after finishing his degree, but is reluctant to leave his new life. He lives among expatriates from West Africa and has a love affair with a white woman. After losing his permission to stay, he runs away and works on a constructing site. L’Afrance is a film with a fragmented structure, ostensibly raw and unpolished. Together with Andalucia they work as a diptych, even though the latter has more comical elements and the main character, now from North Africa, is rather a romantic dreamer, intellectual and kind of a clown.

Gomis’ next two films Today (Tey, 2012) and Félicité (2017) take place in Senegal and the Democratic Republic of the Congo, respectively. At first sight they are less political (for example there is only a subtle remark in Today that the main character returned to Senegal after studying in the US – the fact the others do not really understand) and more universal, but always strongly connected to a specific place. In an interview for Mubi Notebook Gomis says, for example, that in Félicité he wanted to question the seemingly universal perception of Africa as a rapidly changing continent. The problem is that the wealth stays in the hands of few, while most of the people’s lives are full of struggles – as are basically everywhere in the world. But according to Kiva Reardon, however, “the film doesn’t wallow in [Félicité’s] dire circumstances and instead celebrates the agency and beauty that exists all around her.”

These words tell us much about Gomis’ approach and explain why his films are so multi-layered. Gomis’ stories are firmly set in specific places and cities but go beyond; he is always critical but never wallows in characters’ troubles; he seeks beauty but never lets himself be blinded by it – and in no way it is an exotic beauty as seen by a (French) colonizer. It is a look from within which knows the subject very well, and at the same time look from the outside that shows critical distance.

Today can be seen as a parable story showing one day in the life of Satché, an ordinary man living in Dakar. Satché wakes up one morning knowing that it is going to be his last day. According to the tradition he wakes up in his parents’ house and for the last time meets his family, which remembers all the good things at the beginning but then starts to criticize him. In a similar way Satché bids farewell to his friends and ex-lover; celebration of life and memories turns into accusations and aggression. On the basic level, it is a film about life and death, about reconciliation. As Gomis himself admits: “What the film is saying is really simple and if you put it into words, it would sound a bit stupid.” (Since the original publication in May 2018, the quoted IndieWire interview was taken down.)

The beauty of the film lies in the fact that it does not rely on words and turns apparent simplicity to ambiguity. Comparing to Gomis’ previous films, there is significantly less spoken word, Satché himself tells maybe 15 sentences throughout the whole film (which also allowed Gomis to give the leading role to American rapper and poet Saul Williams). Today as well as Félicité can be seen as musicals, though it is not for the songs but rather for choreography and movement that are essential for the scenes. The simple and allegorical tale lets audience find their own theme: the last scene suggests that we might have seen the story of one’s whole life in one day, it might be a story of reconciliation with one’s past, it might be a story of how one starts to appreciate the little things of his life, or a story of an ordinary man who touches lives of many, and so on.

At the same time, Today is not only a story of Satché, but also of Dakar. Satché’s roaming through the city is full of detours – short documentary-like scenes depicting life on the streets and people who have nothing to do with Satché’s story. These episodes are independent of the main narrative arc but give the film another layer. Towards the end we even see shots of massive demonstrations and hear testimonies on dissatisfaction with the state of affairs in Senegal. (These demonstrations led to the resignation of the president some two months after the film’s premiere.)

In Félicité, Gomis treats the city of Kinshasa in a similar manner (without the demonstrations, though). Félicité is in need of money for the operation of her son, so she walks from one acquaintance or stranger to another and asks for help. It is not just the said detours that document the life of the city. Gomis creates an environment in which he mixes real people in real places with actors. For example, in the bar where Félicité performs. It is a real bar and most of the people there are regular folks who frequent it; Gomis just added a couple of actors with instructions. Documentary blends with fiction – a few actors perform a (partly) written story, its main arc, while life in the background continues as if nothing special was happening. The locals were listening to the music and having fun regardless of whether Gomis was shooting or not. Something similar happened in Today, too. The scene in which Satché is leaving the street of his parents was shot on the same street Gomis’ father grew up – people knowing Gomis were just spontaneously joining the story and creating the crowd we see in the film. (From the same now inaccessible IndieWire interview.)

Félicité’s effort to help her son is only the first part of the film. Actually, it is used as bait for the audience that brings them to the second part with much looser structure. The first half of the film connects us with Félicité, we get to know her through rather extreme circumstances. In the second half we follow her life in its banality, but that does not mean it makes it any easier. Her relationship with a man called Tabu is developing, but it seems to negatively influence her relationship with her already frustrated son. Félicité is a profoundly complex character so rare in cinema. We can see her strong will and capacity to sacrifice, her joy of singing, and most of all we see her as the shaper of her own destiny who does not subordinate to anyone. She is neither cold-hearted, nor apathetic as somebody might suggest from the ever-present close-ups on her strict face; she just knows she is on her own and acts accordingly. (See Kiva Reardon’s already mentioned essay on this.) The film is unique in balancing between what Félicité has and what she has not. By the way, her name translates from French as joy. (She got it when she was two years old; until then she had a different, Lingala name, what again suggests complicated identity of the colonized.)

The following words of Alain Gomis do not represent only Félicité, but also his oeuvre in general: “There is this song I love sung by Nina Simone, called Ain’t Got No. The first part says, ‘Ain’t got no home, ain’t got no shoes, ain’t got no money…’ but then it goes: ‘I got my hair, got my head, got my brains . . . I’ve got life.’ The film is constructed this way.”