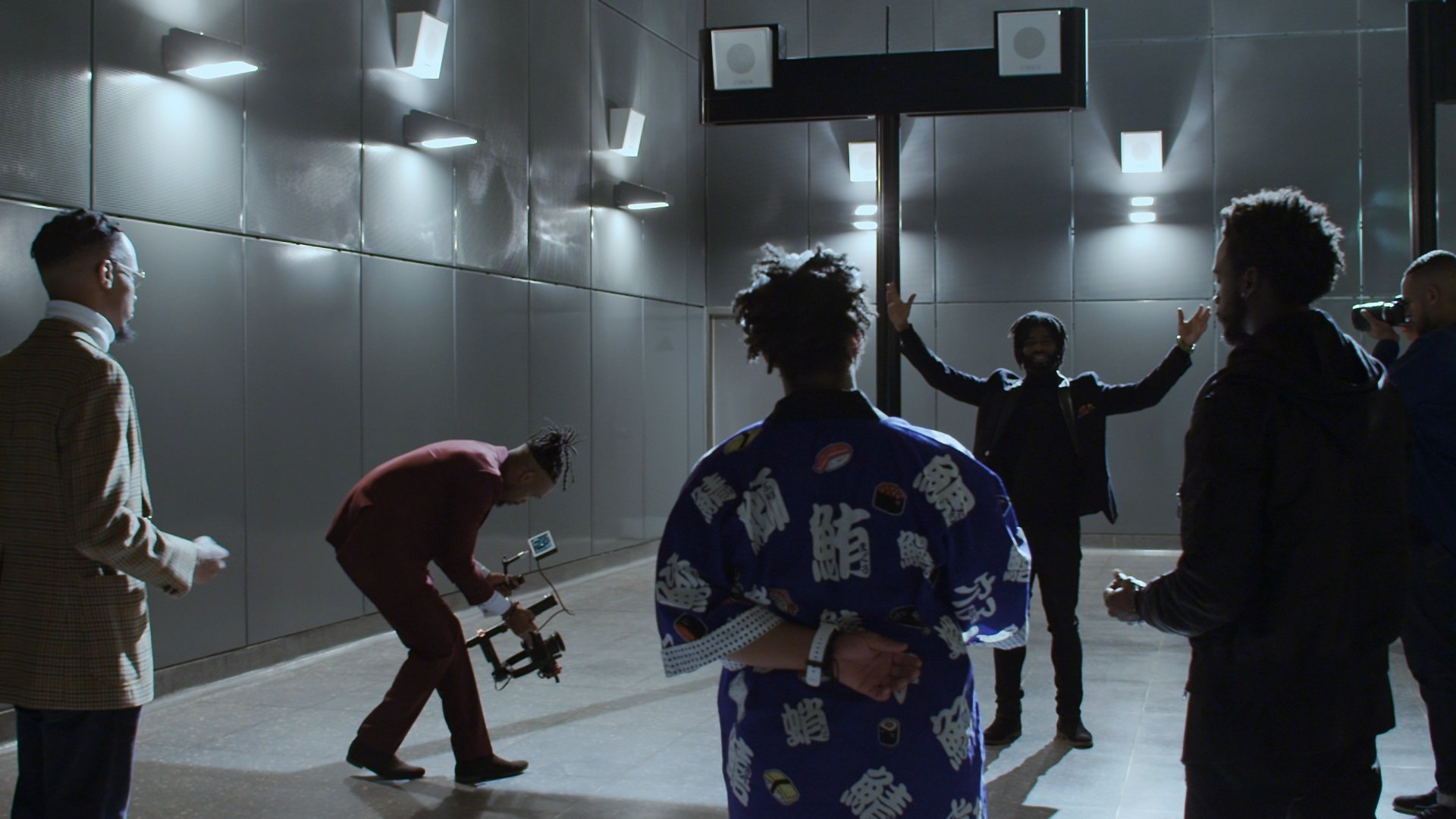 The names Bárbara Wagner and Benjamin de Burca are often featured in the catalogues of A-list festivals. On the occasion of the screening of their short film Rise (2018) during Short Film Celebration this December, we were talking about the tendencies and practices of their work that often fuses many genres.

SG: Topics of freedom, identity, cultural heritage, and its expression are some of the key points of your works. Throughout your body of work, you are giving voice to marginalized groups, minorities. Randell Adjei puts it very nicely in Rise when he says our tongue is our strongest muscle. You, however, add proper (film) medium to this tongue and therefore an ability to speak to masses, viewers across the world. How do you find the balance of authorial and creative visions not only between you and the protagonists but also among you two?

BB, BW: The proposal of the film Rise is to deconstruct the default categorization practices of society, to circumvent notions of class and assume centrality. In Canada, these young, mainly Afro-Caribbean descendant artists are as equal to anyone, as decreed by readings of the land acknowledgment which recognizes everyone to be living on lands borrowed from the first nations peoples of the given areas in which they live. This insists on everyone’s equality, irrespective of the hangover of post-colonial attitudes that sought to divide and other the population along lines of class and race.

The balance of our proposal, working with artists in collaboration is naturally and foremostly honesty, dialogue, and a desire to learn from whom we are working with: It’s important to state clearly what we wish to do and where we imagine or wish for the result to be shown. From our experience, anyone who is involved in a given artistic practice is, more often than not, open to applying their artform to other media (in this case cinema) through the lens of artistic experimentation. This extends the platform of their visibility but does not define it.

In our practice we tend to avoid the concept of ‘giving voice’ and rather, recognize that the artists we work with have their own established platforms, very often reaching many thousands of people. For example, Randell Adjei is the first Poet Laureate of Ontario. This is not a peripheral position, neither in terms of visibility nor prospect. Many of the artists in the film are well versed in and beyond Toronto’s spoken word / and music scene. The project ‘Rise’ takes its name from the spoken word night created by its founder Randell, and is host to sometimes upwards of 2 / 3 hundred young people actively participating so there is no urgency for us to represent or give voice.

Coming from a background in fine art, and Bárbara in Journalism, we also learn from each other and manage to see the world through different perspectives, applying our understanding and creativity is at a constant interface between what we experience (Journalism) and what we desire to make of it (Art).

SG: Could you explain the methodology of your work in more depth?

BB, BW: We argue until we realize we’re on the same page, and if we are not, then we reformulate the page so that we are.

SG: You are shifting between tradition and popular culture. How far is the distance between their meeting point?

BB, BW: This really depends on the focus of our subject. For example, we identify during researching Rise the myriad of historic and philosophical positions that are possible to access. From The African ‘Griot’ culture, oral traditions (including music) align with, say, our interests when making our last film One hundred steps (2021) where we broach questions of history reading through the colonial lens. The difference in these oral traditions is that with the community in Toronto, new concepts are flowing whereas, in Ireland, the songs often follow strict interpretation as they can be up to and over five hundred years old. The creative meeting point here is singly through the advancement of interpretation that is ‘true’ and fresh from the artistic ability and does not devalue the original intent. This is not the case with Rise’s poets who deal with a different type of historic responsibility less related to its form. Thus, the distance between their meeting points in Irish traditional culture is much farther.

Having said that, what is often an interesting indicator of how much the shift between tradition and its contemporary manifestation (popular culture) presents changing dynamics in the society producing it. By this measure, music and dance are the dials by which we see real-time manifestations of social changes occurring.

SG: Importance of music, spoken word, body movement, singing as an expression of motivation, change, resistance that is cumulating in the form of collective energy. We could see it in Swinguerra (2019) in the form of Brega dance, krump ghetto dances formed in Los Angeles in the 1990s, in Toronto subway through the RISE movement where people meet, speak, and perform. What do you think, how thick could be the line between dancing and political act?

BB: I guess it’s always a good starting point to realize that there is no such thing as an act that does not generate political questions, and dance or spoken word poetry, as examples mainly stems from resistance and the need to vanquish anxieties generated by prejudices suffered under oppressive forces. Sometimes this resistance is manifested in the need to create a community and identity in the face of those odds as projected by the political or social scenarios within which they are othered. This is resistance and a political act.

SG: Angela Davis depicts the vision for the 21st century to do not copy movements based on initiatives of charismatic leaders as individuals. What we need is to start perceiving movement as leaderful instead of leaderless, she says, referencing the responsibility of each individual to have a full focus on current affairs. Rise does not have the main protagonist. Our protagonist is a movement, community, one body of clear vision. Do you think this is the way how changes in the social system can implement and stabilize?

BB: I one hundred percent agree with Angela Davis, and I feel the methodology of groups like the Black Panthers is a shining example of a leaderful collective approach. In many respects, my conviction is that our continued existence on this planet hinges on this approach if we are to overcome the toxic systems produced by blind extractionary global capitalism. Our next film will attempt to broach this subject more closely, watch this space.

SG: Can you further explain the concept of edutainment?

BB, BW: Edutainment is a combination of ‘entertainment’ and ‘education’. Although the etymology is older and denotes exactly what it implies, education through entertainment, in the case of Rise as an edutainment company the name is inspired by the New York Hip hop artist, rapper, and philosopher Lawrence “Kris” Parker, best known as KRS1 whose album entitled ‘edutainment’ presents six ‘exhibits’ that talk to, about and from the experience of people of African descent in North America.

SG: You are using all available tools of film, fiction, documentary, performance, musical, photography mixed together. Rise is usually classified in catalogues as an experimental documentary. Some progressive A-listed festivals such as Viennale already refused to classify films according to these categories. Besides, the most striking works can be discovered in mixing all possible approaches and playing with new connections. How did you approach aesthetic form during the process of making Rise? And do you think is it necessary to have these kinds of classifications?

BB, BW: Learning what people do is crucial, and identifying their differences, for example, writing a poem, reading it, speaking it, dialoguing with it, thinking it, are all different forms and ones we wished to transmit across the film Rise. The subcategories of interest in these various ways of imagining the creative process led to a fundament of possibilities against the backdrop of the subway, which is a passage like a throat, that pushes air through its windy tunnels.

What is important to us when making cinema in the context that we do, is to adapt our methods to represent the ethos of the groups we are working with, and try to represent a clear image of the art forms they produce. We do not wish to create an image in which they could not identify themselves. With Rise, a self-declared ‘safe space’ and inclusivity-oriented organization, it was vital that we adopted these principles, leaving us with the task of not cutting any scene or member of the group who came forward to be in the film and to ensure they were all supported and safe, as would be the case in the spoken word night Rise.

As for classifications, they stand to reason, and it’s what we do as human beings, though it’s even better when classifications are necessarily porous, as it represents the actual complexities existent in life. Finally, it’s not a criticism but when a festival refuses to categorize, they are also being categorical in that refusal.

SG: Your stories suit to the format of the short film perfectly. However, the distribution of short films has much more difficulties than that of feature films. Short film audiences and festival audiences are still niche. Will we be able to reach intelligent souls everywhere?

BB: That Bárbara and I work between the world of cinema and art, we have the advantage of engaging different audiences in this regard. What can be interesting is the form of aesthetic experience as decreed by the physical differences of a cinematic presentation and an installative, continuously running exhibition.

SG: My Disco Sailing colleagues and I were recently discussing a theory according to which each individual should dance or perform at least one minute per day, anywhere, under every circumstance. Your work is making a tribute to this kind of daily performance as well. What would happen if we’ve had this as a daily-basis regulation? Do you think one minute dance can lead us towards a better world?

BB: David Lynch is convinced that if everyone practiced transcendental meditation we could change the world, end hunger, war, poverty, and so on, if that was indeed our collective intention. It is incredible what we can manifest collectively when decided together. It’s true.

In many respects, perhaps a decent amount of the planet is already dancing for one minute a day (look at TikTok). Personally, I think dancing for a minute a day (I would suggest at least an hour) would definitely go in the right direction. One thing is for sure, we would be happier, and collectively being happier is the glue that binds us and the ointment that can heal our deepest wounds.