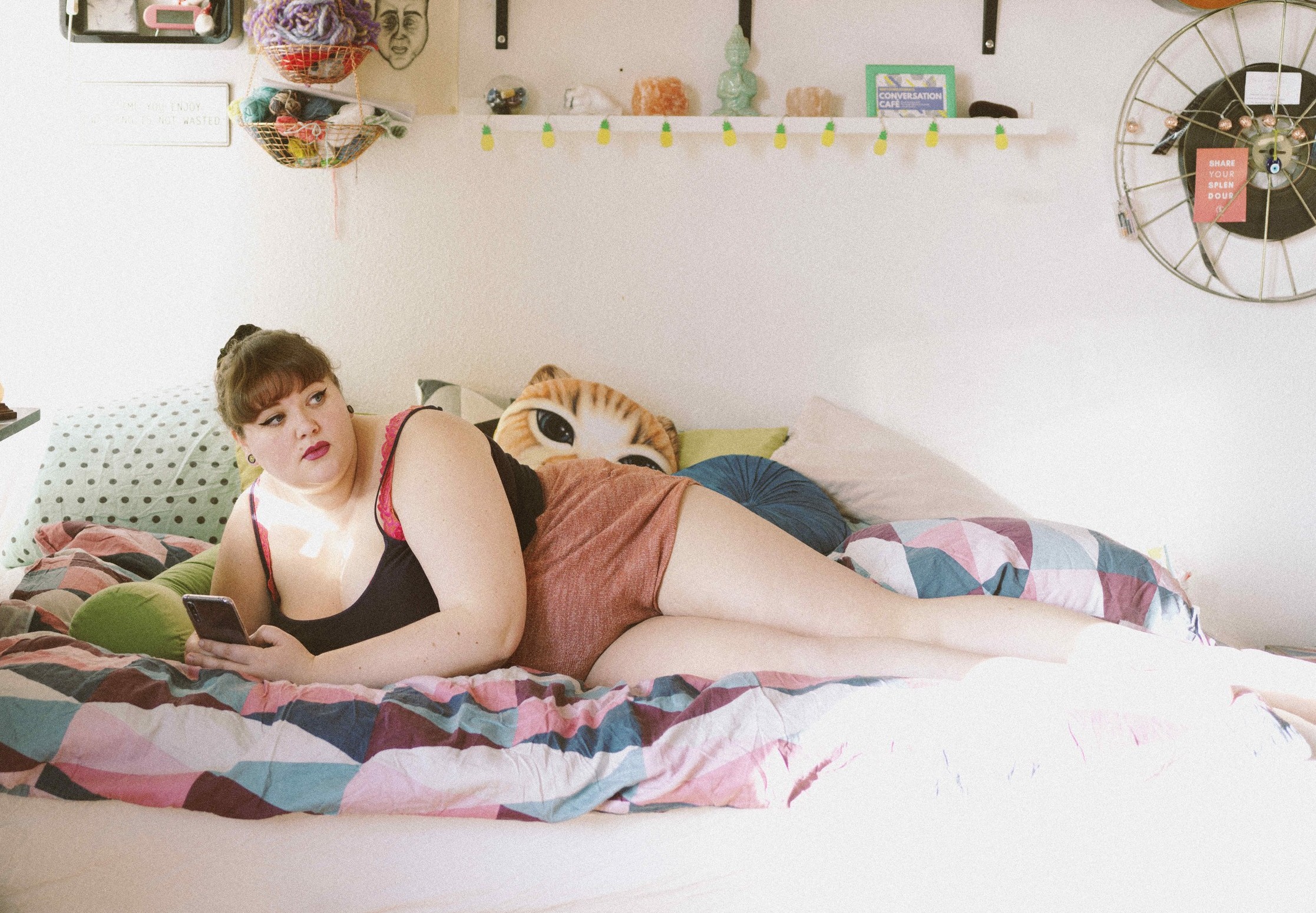 On body positivity without toxic positivism

I have never been thin. As far as I remember, I have always been referred to as a “big man” or a “bear”. I am a son of a P.E. teacher and my brother has been doing sports actively, so I did not need Cosmopolitan nor Hollywood production to show me the beauty standards. Although I am still grateful to those, as the made me realize pretty early in the day that I am gay. Somewhere between my father insisting I shall do something with myself and 15 guaranteed best ways to orally satisfy your partner I start to realize my body is different. It does not remind of superheroes of my childhood nor is it a type of body that wins over men or women. My body seemed disgusting to me and I hated myself. I hated white because it made me feel I look like a whale. I have only worn black, long-sleeve T-shirts or hoodies. I hated being gifted clothes for Christmas or birthday, because I knew it would not fit me and people would insist, I try it on anyways and then I would pretend I am laughing about the fact that T-shirt is too small. And clothes-shopping. My god, how many times have I had to persuade the shop assistant I really want to spend money in their shop because of my extremely big feet size 46 with abnormally wide arches. One day my psychologist has asked me: “Tomáš, have you ever visited a free beach?” Somewhere around that moment my personal revolution has started, and I showed the society my middle finger and a cry: “I AM FAT!” You cannot imagine how happy it made me to re-enact this feeling in a scene of my documentary Fat Front.

Body positivity. This phrase is gaining a momentum with a growing new wave of feminism. As a man I started to notice most intensively ever since the #MeToo movement has started. I think that the courage that the abused women have displayed also encouraged the movement for bigger body diversity in modeling and to the general theme of “self-love”. What is it actually? There is a misleading hoax that the supporters of this movement gave up their struggles with weight and decided to “come to terms” with being fat. This is the first big mistake. Body positivity is certainly not about giving up and it has nothing to do with the weight of a person. In my opinion, body positivity is a state where you accept your body as YOUR body. When you accept that it is impossible to return, exchange or replace the body you have been given and that you definitely do not need to accustom it to meet the widespread beauty standards. In a contemporary world of Instagram filters, everything has to be perfect, in the right colors and with an adequate number of hashtags and at least 410 likes. Come on, followers! I am perfect, I am beautiful. Do you remember that Black Mirror episode? The one that served as a model for social credit score system in China.

At one point, all my life was centered around weight loss

In a documentary we see a story of four women, Instagram influencer that decided to fight against the social perception of their excess weight with hashtags such as #fyourbeautystandards or  #fashionisforeveryone. They organize secondhand clothing sales for oversized girls, they have their own club, they do lectures about accepting one body at schools. Meanwhile you get to know their life stories about how they are discriminated against by their families, how they are just some kind of a fetish trophy for men or you simply follow their daily routines. The problem of finding a fitting costume, an attempt not to hit a journalist that asks very inappropriate questions. Well, but why should you be interested in this? Why are we interested in this topic at all and why is Fat Front decidedly an essential contribution to the new wave of feminism? I would display it on the shelf right next to the film The Moon Inside You (d. Diana Fabiánová, 2009) or Lemonade by Beyoncé. Back to my game-changing rhetorical question: WHY SHOULD WE CARE? It is 21. century and inclusivity is slowly but steadily becoming a genre trend. Maybe you do not perceive it on a conscious level, but we are going through fundamental changes when it comes to culture. To watch a series that is casted merely by trans people (Pose) is a revolution in LGBTI+ inclusion. A film based on comics that is simultaneously an honor to African American community (Black Panther) is a revolution in the fight against the racism. Media addressing underrepresentation of the European and world actors at prestigious awards is a revolution. We have come a long way from the idea that family consists of a happy, superficially smiling father and happy, superficially smiling  mother and two kids. We live in a time where your children will see movies that feature two men holding hands or people with myriad of skin tones and it will be normal. Is it not amazing?

The two directors decided to build Fat Front on a very courageous model, and I believe the film is yet to catch some major attention worldwide. Protagonists themselves are openly talking about the pressure of the society on continuous weight loss. The society has created some kind of a beauty ideal that we more or less willingly surrender everything to. Trust me, you yourself are guilty of buying a low fat chees or overprized smoothie just to make your point about living a healthy life or being on a diet and elevate your social status. Despite the Fat Front being centered primarily around the protagonists, the topic and adaptation have a way broader reach. Why do I mention all this? This is all I am thinking about after seeing this exceptional film that I already want to see again with my mother, younger niece or cousin and eat a bucket of ice-cream while we are at it. Why? Just because!

This topic is oscillating somewhere between an enforced “feel-good” road trip and some seriously depressing stuff. Fat Front is surprisingly a very friendly film. The directors know they serve you scenes that you are not used to seeing. That there are bodies you maybe did not wish to see. And they do it in a delicate and sensitive way, so you get used to full-fat bodies and in your head, you find yourself saying: “Good for you babe!” or “Yassssss”

Would you like to be with someone that considers you fetish?

People are often asking whether our country is tolerant. I always say that lack of tolerance is caused by the lack communication and education. Could we be surprised that an old woman is scared of a black person or Muslim? We cannot, because she has never seen such person before. If she was meeting the person on a regular basis they would soon be shopping together! Why am I mentioning this? Film Fat Front is breaking a taboo around female body perception. It is an important film about the power of body positivity, about the fact that overweight women are not necessarily unhappy or self-destructive. It is about four women that found their happiness inside them. That is sometimes enough to make a broader societal statement. Four women that like themselves. Great job!

The author is a theatre director and a performer, not a film critic and this article is his reflection on the film Fat Front.