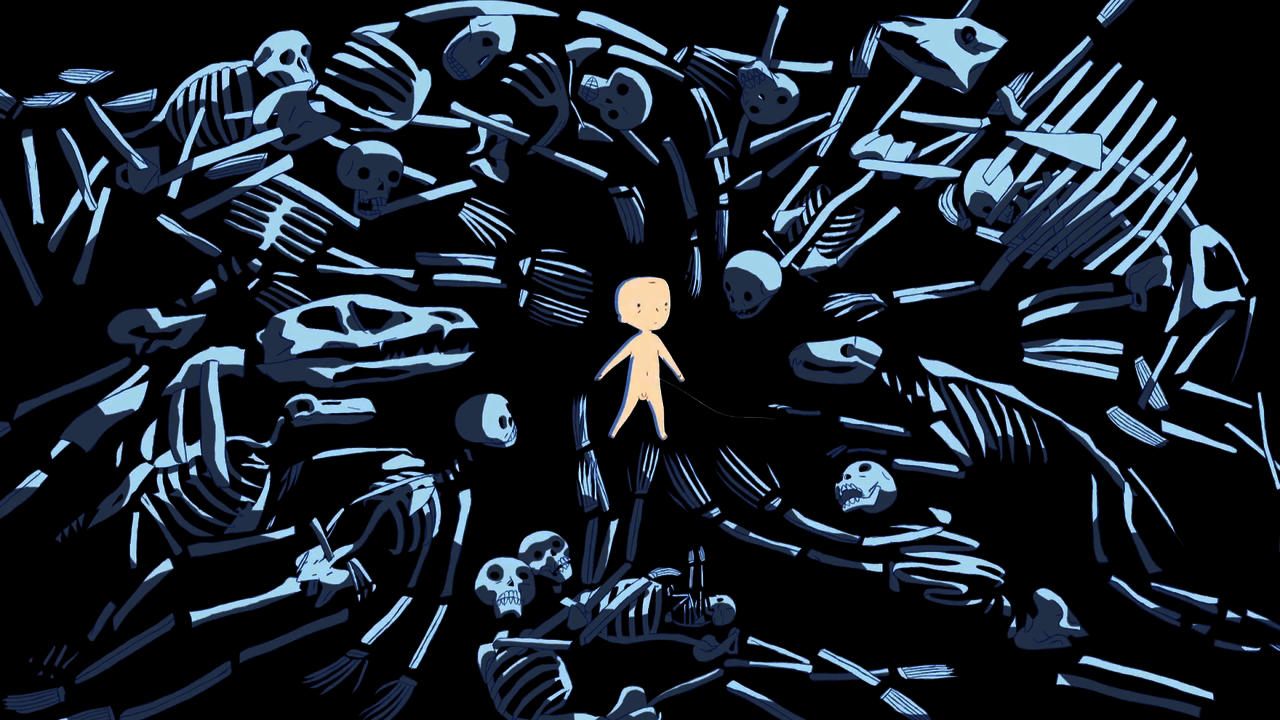 Alan Holly is an Irish filmmaker and animator that like to cover the topic of finiteness and ignorance of humanity. His stories are also concerned with the alarming state of the environment and they are becoming more and more accurate. Alan Holly connects his artistic expression with his personal interests and seeks similarly oriented collaborations. He also collaborates with Bratislava-based art film agency Pop Up Film Residency. In this interview you will find out what pressing issues he likes to address in his films.

DM: Your films have a slow and melancholic atmosphere. Although they’re delicate in their nature, they touch on serious topics. Can you tell us what mood you try to capture the most?

AH: I think it changes from film to film but I hope they all are thoughtful but also playful. I do want the atmosphere or the mood to be palpable and strongly felt. The colors and music play a big part in this.

DM: The way of dying in your film Coda reminds me of waiting in general. Friday night in the city is full of waiting. People are waiting outside for a taxi, or they are looking for other ways to get back home. Do you think the waiting is a natural consequence of a contemporary way of living?

AH: I wanted Death to evoke a person working night shifts and dealing with the city when drunk. Patience definitely plays a role in here. Working on something that does not align with someone’s faith and values is also a form of suffocating waiting. One counts hours until they can revert back to their old routines and plans. I do not think that waiting nowadays comprise a larger portion of our lives than it used to in the past. Nonetheless, waiting takes up a big share of our lives. Awaiting and expectations for the most part. We wait for things we wish for. And if we are not careful enough, we might wait forever.

DM: Do you believe in afterlife?

AH: I think it is important to think about the shadows in our lives. Death is definitely a big one and one that brings other aspects of our lives into perspective, our actions, our hurts, our flaws. I think there are plenty of different things we can do to acquire insights. I think science, philosophy, meditation and psychedelic experiences can all offer ways to understand this world from another perspective which can help us understand life better.

I don’t believe in any religious afterlife. I hold on to the idea that our only sure shot at a ‘heaven’ or ‘hell’ is during our time here. Each of us is a tiny moving and feeling particle of existence. We experience the world for a certain time and when our time is up, we feel no more. This makes sense to me. At the same time, I think our understanding of existence and reality remains very limited despite the great ongoing work of science, reality is very mysterious. I would not like to rule out the idea that our consciousness rejoins a body of collective consciousness after death, some kind of “omnipresence” although we have no concrete reason to believe it.

DM: Do you think that death is made of everything we have already forgotten?

AH: Who knows, maybe it is just made of nothing, lights out, the end.

DM: The nature seems to be an important element in your films. Is has a significant presence in both Coda and Old fangs. Why is it so? Can you see the connection between life, nature and death?

The terrible and unsustainable imbalance which currently exists between our society and nature definitely brings the connection between nature, life and death into sharper focus, particularly the fact that we are currently living through the sixth mass extinction of life on this planet because of human activity and our mismanagement of our natural resources and lack of respect for non-human animals, whose habitats we steal and destroy and who we happily kill and eat for our pleasure and without thought of their lives or experiences.

The story and setting of Old Fangs come from Adrien Merigeau who I think has a great reverence for the beauty of nature.

DM: Then there are bad habits like smoking, drinking alcohol. Friday evening in the city and daily routine of a sad father. It looks like resignation to the present. Do you think that a human cannot confront himself, and is looking for an easier way how to get out?

AH: Resignation or an escape, for sure. It is of course generally easier not to confront oneself, we all are so terribly flawed, doing so can be painful, if positive and necessary. I think everyone can confront themselves and should, though I wonder if it every gets easier. It is life’s work.

DM: I think that animated film provides an inherent feeling of fragility. I can see this especially in the moments where you are combining animation with some shots of nature. It looks so raw and too real. Why have you decided to start directing animated films?

AH: The impetus for using photographs of nature in Old Fangs came from Adrien. I think combining animation and photography breaks the fantasy and escapism of animation and connects it with reality, and I find the effect that I feel from that might be interesting. My entry into animation is that of someone who loves drawn and painted art, it always spoke to me more than theater, live-action cinema or photography, although I do love them too.

DM: Do you remember the moment when you for the first time thought “I will start making animated films”?

AH: I do not remember any particular moment but from quite a young age I imagined making animated films, without really knowing what it entailed, beyond a lot of drawing which was the one thing I was sure I wanted to do. I think maybe when I properly started to read novels as a teenager and found myself imagining them as animated films, I really started to take the idea seriously.

DM: Is there any important message that you would like to present in your future films?

AH: We touched on the subject earlier with your question about nature and our relationship to it, the film I am currently writing and have been working on while in Bratislava deals in part with our current and still worsening relationship of the society with the destruction of nature and the planet. In 2019 we have seen the increasingly frequent effects of climate change, particularly with the global wildfires in Siberia, the Amazon, California and most recently Australia have been particularly alarming. In the coming years we are going to have to ask ourselves a lot of difficult questions about the kind of the world and the future we want, and what we are wiling to do and sacrifice to achieve that.